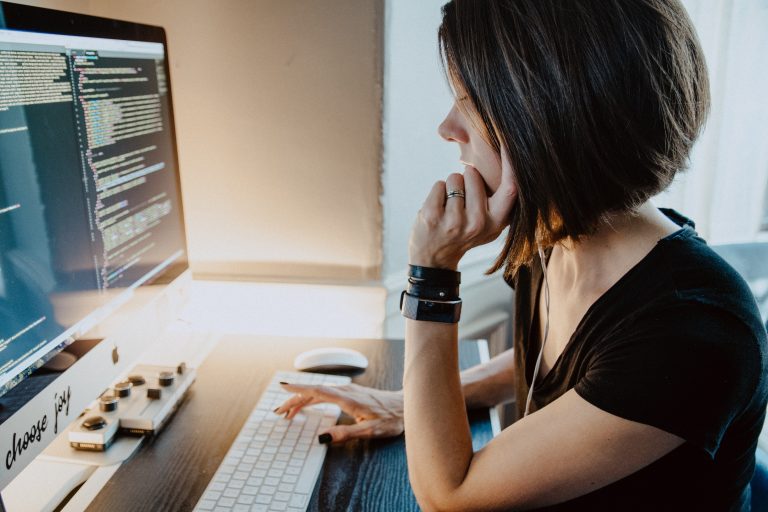 Getting more women into tech has been a major focus for companies all over the world in the past years. The IT sector has been struggling with gender diversity problems for a long time, and while this issue has been discussed more and more often in recent years, no significant change has taken place. But it has become clear by now that inviting more women into tech is not only a moral obligation, it’s also common business sense.

Since we’re on a mission to close the digital tech talent gap, and because we want to invite more women into tech, too, we created the CoderGirl Scholarship.

First, we’d like to let you in on some details about the digital gender gap.

Then we want to show you how the presence of women could be invigorating for development projects, digital products, and the tech scene as a whole. The imbalance of genders in tech today is actually a guarantee for the lack of quality in products. After all, when half of the world isn’t involved in creating the digital solutions of today and the future, how can we even hope that these products will fit everyone, right? We will show you what can go wrong through some real-life examples.

Finally, we’d like to introduce you to our CoderGirl Scholarship, also to inspire you to join us in inviting more women into tech.

There's still a long road ahead

Currently, the gender gap in digital fields is a global concern and a complex research topic. Different statistics show different ratios for women in tech by country, sector, company and even specialisation. Most generic research puts this ratio somewhere between 10 to 30% – that is having 1 to 3 women in 10 digital professionals. As for software developers specifically, only about 8% of them are female worldwide, and although 30% of Science Technology Engineering and Maths (STEM) degrees are held by women, even they rarely end up in IT.

Even Codecool statistics confirm the low numbers. Looking at 1200+ alumni internationally, we have only 1 woman or girl in about every 5 graduates. The figures show that there’s an urgent need for change, and we’re not waiting for anyone to start it. We want to start on our own, and that’s why we introduced the CoderGirl Scholarship.

In terms of stereotypes, there are still a lot of generalisations associated with coding. People tend to visualise coders as men in glasses, sitting in a dark room all day.

But the age-old notion that coding is a men’s profession is slowly becoming obsolete. As more and more tech companies are realising the importance of diversity in their teams, and are looking to hire more women, the stereotypes will slowly but surely break. It’s a long process to change an image like this, but involving more women in tech is going to be valuable to the tech industry as a whole.

Why you want more women on your team

First of all, women can code, too. Women are believed to be more creative, empathetic and understanding than men generally are, and these qualities are also extremely valuable when working in teams, and when creating products for a variety of people.

Plus, around 53% of European companies that are trying to recruit ICT specialists are having difficulties in finding qualified people – of any gender. And it’s not like these companies aren’t looking to hire women. It’s just that the tech talent gap is widening at an accelerated rate.

So having a new wave of skilled women enter the tech scene could not only help women start new lives in fulfilling, future-proof careers, but could help solve the problem of the ever-widening tech talent gap at companies. What’s more, it could improve digital products and services, too.

If we look at the design, development, or management of digital products and applications all over the world, we can see a definite pattern. When men are in charge without the other gender’s insights, it often happens that the final digital product doesn’t fit women at all.

For example, women use their phones differently. They put them in pretty cases, then bury them in their handbags, mostly – and don’t simply wear them in their front pockets as men do, where they’re quickly accessible.

Why is this interesting?

Well, it became obvious once the NFC payment service went live. It resulted in surprised male executives scratching their foreheads, wondering how their estimations about the adoption and success of the service could have gone this wrong. And the only reason behind the failure was women being left out in the solution design phase. Who knows how the product’s launch could’ve gone, and how the product would have looked like had women been asked to give their two cents in the first place.

Now let’s talk about differences in size for a second – hand size, of course. Women have smaller hands – yeah, we know, obvious. Can you imagine though, that the first wave of game console controllers weren’t optimised for the hands of gamer girls at all? That is 41% of the gaming market in the US today. That’s what we call a missed opportunity.

We know, difference in size of hands is a no-brainer. But did you know that 90% of women’s pupils have a wider diameter than men’s? And it does matter, of course. Where? For example, standard VR headsets cause nausea and headache for women a lot more often than for men. If only they had been designed differently, right?

These blips show that it’s vital to encourage women to start a career in tech and get involved in digital product development. Not only because it’s just fair. Also to save companies from similar painful learnings after a product launch.

To actively bring this change forward, we created the CoderGirl Scholarship.

Why we started the CoderGirl Scholarship

There’s zero evidence showing that one gender is more capable to code than the other. We see the reason for the diversity problem elsewhere: in lack of social support, confidence and opportunity.

The way we see it, there will only be more female programmers if more are trained. Our aim is to give girls who have been thinking about starting a career in tech a nudge, inspiration, and some motivation. It’s for those who want to take the first steps towards starting a new career, but for some reason, have not yet started this journey. They just may be lacking resources, or they might feel discouraged by stereotypes.

“Codecool would like to make girls and women aware of the fact that they are welcome in technological, digital and programmer training and career paths. As an open-minded, transparent company, we strive to get rid of the stereotypes connected to technology, programming and managerial roles in Central and Eastern Europe. One of our main objectives is to continue increasing the 20% rate of our female students – which otherwise even now exceeds the local averages in this sector – and to help a generation of much more diversified professionals and start-ups to start and develop their careers,“ says Codecool’s Head of Marketing, Anna Ferenczy.

The scholarship offers motivated, courageous girls a once-in-a-lifetime opportunity, and gives them a head start in their IT careers. They will get the entire Codecool package with pro mentor support and our mastery-based learning model to take them to a new tech career – free of charge.

The Scholarship is available for girl and women students in all Codecool locations: in Hungary, Poland, Romania, and Austria, too. Successful applicants will have the chance to complete one of our courses for free.

Be part of the change

98% of all Codecool graduates are hired right after they complete their Codecool journey due to our proven methodology, experienced mentors and unique curriculum. If you’re interested in opening up your positions to more women, we invite you to partner with us to fill your vacancies with talented, motivated female professionals.

We believe in transformation and growth. We can bring you the right talent based on your preferences, or help your colleagues become your best and most motivated tech professionals.

If you’re ready to grow your team and enhance your organisation’s digital skillset, get in touch!

We can’t wait to talk with you.

Codecool is the fastest growing programmer school and tech talent hub in Europe. We make the digital talent gap disappear and enable people to take on future-proof tech careers. We solve IT skill development and resource needs via training and recruitment.

The Codecool Blog is a collection of the coolest insights and best resources for HR heads, IT leaders, other business executives and small business owners in charge of tech talents and digital strategies.

Upskilling and reskilling: how both can accelerate your company and workforce

Digital professionals – who they are, and why they’re important

This website uses cookies to improve your experience while you navigate through the website. Out of these, the cookies that are categorized as necessary are stored on your browser as they are essential for the working of basic functionalities of the website. We also use third-party cookies that help us analyze and understand how you use this website. These cookies will be stored in your browser only with your consent. You also have the option to opt-out of these cookies. But opting out of some of these cookies may affect your browsing experience.
Necessary Always Enabled
Necessary cookies are absolutely essential for the website to function properly. This category only includes cookies that ensures basic functionalities and security features of the website. These cookies do not store any personal information.
Non-necessary
Any cookies that may not be particularly necessary for the website to function and is used specifically to collect user personal data via analytics, ads, other embedded contents are termed as non-necessary cookies. It is mandatory to procure user consent prior to running these cookies on your website.
SAVE & ACCEPT